Ford has filed a very interesting patent where the use of drones increases the off-road capabilities of its vehicles, especially in extreme weather conditions.

The design and development departments of each company are constantly busy with the development of new ideas and patents aimed at improving cars and their capabilities.

Many of these ideas apply, others do not have the same fate. One such patent that has not yet found its way into implementation is Ford’s idea of using drones to improve the ability of its vehicles to reach as far as possible off-road or in extreme weather conditions. behind what Ford presents is particularly smart and ambitious. The drone is connected to the car’s GPS so as to guide the vehicle to be able to pass through difficult points of the route. 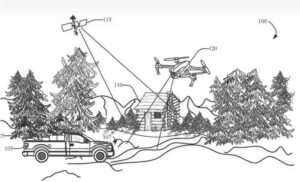 According to Ford and the World Bank, 31% of the planet’s population does not live near roads with access to all seasons, and 98% of them live in developing countries.

Ford ‘s helicopter system could provide valuable assistance to many people so that they have easier access to inaccessible areas and deliver products to remote locations.

Ford also finds it useful that it could be used by fleet management companies, where the drone can give an idea of which vehicle can best respond to each route depending on the terrain in front of it.

The drone in relation to the contribution of satellites has the advantage that it provides real-time information about the conditions prevailing on the road, allowing the driver to make the right decisions especially in extreme weather conditions.

The patrasdroneacademy.eu website uses cookies, continuing your browsing you agree to their use .Accept Reject Settings
Manage Consent

This website uses cookies to improve your experience while you navigate through the website. Out of these, the cookies that are categorized as necessary are stored on your browser as they are essential for the working of basic functionalities of the website. We also use third-party cookies that help us analyze and understand how you use this website. These cookies will be stored in your browser only with your consent. You also have the option to opt-out of these cookies. But opting out of some of these cookies may affect your browsing experience.
Necessary Always Enabled
Necessary cookies are absolutely essential for the website to function properly. These cookies ensure basic functionalities and security features of the website, anonymously.
Functional
Functional cookies help to perform certain functionalities like sharing the content of the website on social media platforms, collect feedbacks, and other third-party features.
Performance
Performance cookies are used to understand and analyze the key performance indexes of the website which helps in delivering a better user experience for the visitors.
Analytics
Analytical cookies are used to understand how visitors interact with the website. These cookies help provide information on metrics the number of visitors, bounce rate, traffic source, etc.
Advertisement
Advertisement cookies are used to provide visitors with relevant ads and marketing campaigns. These cookies track visitors across websites and collect information to provide customized ads.
Others
Other uncategorized cookies are those that are being analyzed and have not been classified into a category as yet.
SAVE & ACCEPT