DJI just announced that the company has been granted the world’s first C1 EU-type examination certificate for the Mavic 3 series drone under the new European Drone Regulation.
That means with the C1 certificate and C1-compatible updated firmware,
Mavic 3 pilots will be able to fly in the A1 Open category (instead of the more regulated and harder-to-get A2)
from January 2024 onward.

In recent years and with the increasing number of civilian-operated drones, it was clear that drone legislation needed serious updates and unification. In Europe, this happened quite recently, although most changes are currently in the transition period and will be fully effective from 1 January 2024. We have summarized the most important information in our article from January 2021, when the new European Drone Regulation was published. I also recommend checking the official EASA website. Anyway, the C-class certification is a key component for drone flying in Europe in the upcoming years. Either way, C-class certification is a key ingredient for drones flying in Europe in the coming years.

The DJI Mavic 3 is the company’s current foldable flagship.

Announced in November 2021, the drone boasts an impressive spec sheet with a large gimbal-stabilized camera unit capable of 5.1K 50fps video on an MFT sensor, up to 46 minutes of flight time and so on.

According to DJI, the C1 certificate for the Mavic 3 series requires users to update to C1-compliant firmware which brings several advantages. Users will be able to fly in the new A1 Open Category and will no longer have to pass the complex and costly A2 “Remote Piloting License” exam (The A1/A3 “Proof of Competence” basic drone certificate, however, is still needed for all drones weighing 250 grams or more).

What exactly is the difference between A1 and A2? DJI summarized the exact differences between flying a drone with and without a C1 certification in three categories:

No C1 – take A2 online courses through a school and obtain an A2 “Remote Pilot Licence” by taking an officially recognized online theory test and declaring self-practice training. In case of failure, the customer must re-apply for the examination

When the ActiveTrack Intelligent Flight Mode is used to film people or objects, the distance from the person/object will be limited to 50m. Beyond 50m, ActiveTrack will be disabled.

The Auxiliary LEDs will be turned on or off automatically during use, based on the actual environment, and

the LEDs at the front arms of the drone will blink by default for the duration of the UAV being powered on. 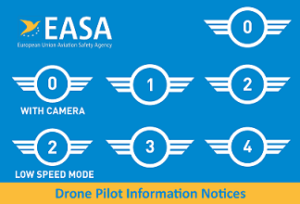 These changes will be activated whenever any C1-certified drone of the DJI Mavic 3 series is flown in the European Economic Area (EEA).

According to DJI, the application process for obtaining the new C1 class identification label for the Mavic 3 series is scheduled to be available to all customers from Q4/2022. From that date, users can request it on a voluntary basis at no cost. The process will require providing the drone serial number and confirmation that the C1-compliant firmware has been installed. Once the C1 application process has been launched, all future firmware updates of the Mavic 3 series will include the technical changes required by the C1 certificate and cannot be reversed.

C-class certification for other DJI drones

The good thing is that DJI promises to get the C-class certification for the company’s other drones in time to comply with the new EASA rules. As the company states, it is committed to complying with the new European Drone Regulation for other existing and future drone models, and it will work with notified bodies to obtain additional drone certificates over the coming year.

The patrasdroneacademy.eu website uses cookies, continuing your browsing you agree to their use .Accept Reject Settings
Manage Consent

This website uses cookies to improve your experience while you navigate through the website. Out of these, the cookies that are categorized as necessary are stored on your browser as they are essential for the working of basic functionalities of the website. We also use third-party cookies that help us analyze and understand how you use this website. These cookies will be stored in your browser only with your consent. You also have the option to opt-out of these cookies. But opting out of some of these cookies may affect your browsing experience.
Necessary Always Enabled
Necessary cookies are absolutely essential for the website to function properly. These cookies ensure basic functionalities and security features of the website, anonymously.
Functional
Functional cookies help to perform certain functionalities like sharing the content of the website on social media platforms, collect feedbacks, and other third-party features.
Performance
Performance cookies are used to understand and analyze the key performance indexes of the website which helps in delivering a better user experience for the visitors.
Analytics
Analytical cookies are used to understand how visitors interact with the website. These cookies help provide information on metrics the number of visitors, bounce rate, traffic source, etc.
Advertisement
Advertisement cookies are used to provide visitors with relevant ads and marketing campaigns. These cookies track visitors across websites and collect information to provide customized ads.
Others
Other uncategorized cookies are those that are being analyzed and have not been classified into a category as yet.
SAVE & ACCEPT